Hi everyone, Davey here from Stumblor Pinball. Hopefully some of you might remember me from one of my other long winded introductions, such as "Oh god not another mod" and "Just smile and nod". If so, feel free to skip ahead until you get to the good stuff. For everyone else, here’s my backstory - I’m a mod maker based in London that has been slowly releasing mods over the last few years, most recently the Godzilla Tokyo Neon mod (an animated LED neon sign) released 6 weeks ago, the Chase Echo (a redesigned chase board for CFTBL) and Move Your Snackbar (a lighting mod for Swinks Snackbar) and a bunch of others. My workshop is now a full blown mod production line full of semi organised Ikea storage boxes, derelict board ideas and some sad attention deprived pins (not GZ though, he’s an inside-the-house pin).

So what’s this all about then? Didn’t you just do something like this?

Dude that show was canned years ago.

I don’t watch TV - I’m too busy making you mods!

I’m not real. And stop dodging.

Right you are. So GZ has an awesome pop bumper that is positioned in a very un-Stern-like location really close to the flippers. It’s made to look like a Xilien UFO and it’s one of the fun and unique features of the game. However, the stock attire of the UFO isn’t very inspiring, so every mod maker and their mod making dog has had a crack at pimping it up.

Here in the UK, the very talented Paul Jazzbouche has also had a crack at it, and came up with this beautiful thing. 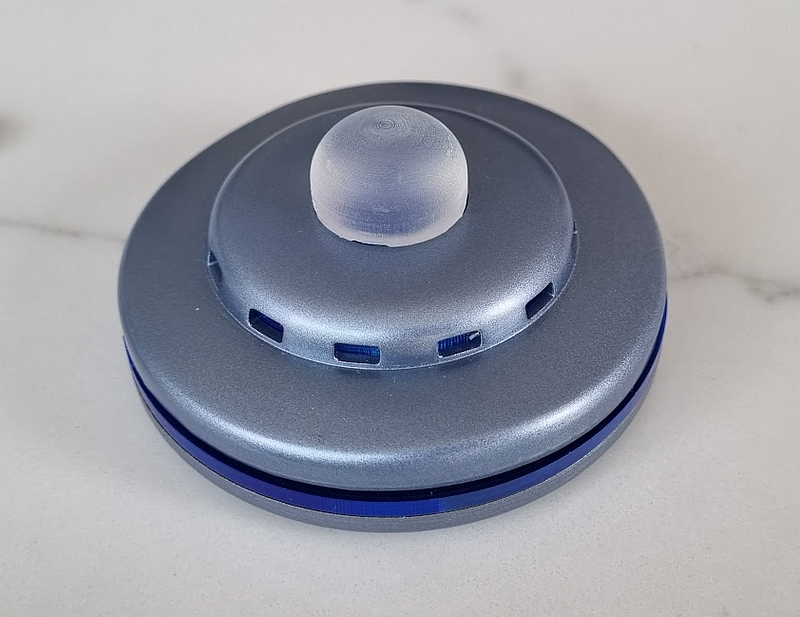 Paul didn’t really have any plans for doing them at scale, but asked me if I wouldn’t mind having a look at lighting them up using my Lollypops LED board. Never one to turn down a fun sounding project, or to consider any future workload implications, I said “Sure!” and we got to work.

There’s a lot to cover here, so let’s just cut to the chase. 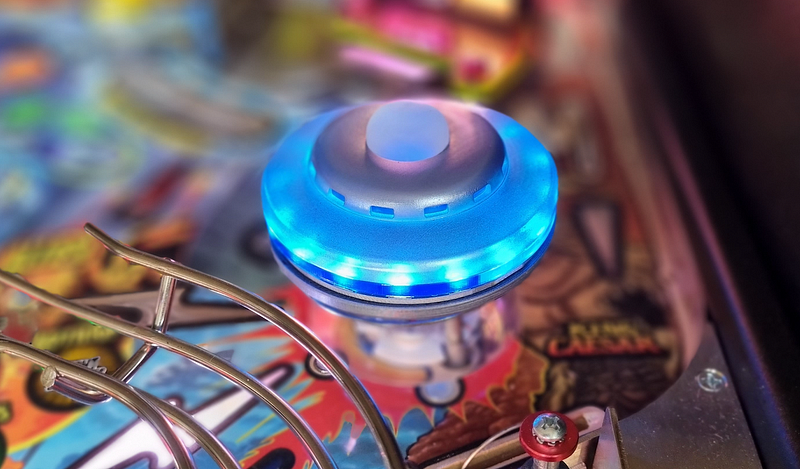 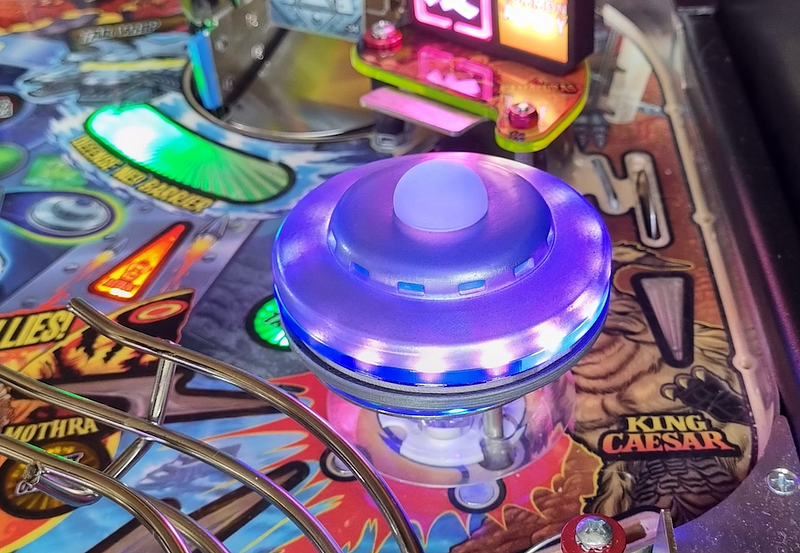 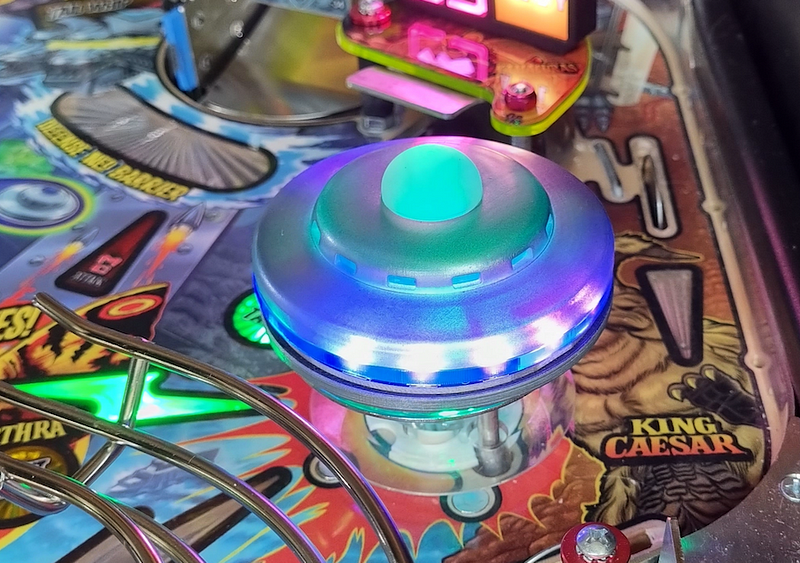 Inside each UFO is a 16 LED RGB ring connected to the Lollypops board, which triggers an animation effect when the UFO is hit. The UFO is printed resin and designed to be translucent, so will diffuse the light coming through it naturally, both from the ring and the original center light which remains in situ. When not lit, the UFO is a blueish/silver hue to mimic the appearance on the playfield.

Now for those familiar with my Lollypops board, you’ll know that it has four sensor inputs and four LED outputs. The UFO was taking one of these pairs, so it would be downright wasteful not to use the others, right?

So, let’s light up them slings as well.

At the bottom of each sling is an 8 LED RGB postlight board, once again connected to the Lollypops. When the slings are hit, the sensors pick this up and an animation effect is triggered.

With 3 x sensor/LED pairs now in use, that left one last pair that could be used for something. Initially I was thinking about lighting up the zilla figure somehow. That was of course, until Walter sirlonzelot posted his awesome idea of lighting up the Godzilla heat ray in the backbox.

Walter had no plans to market the work he’d done, so I asked him if he wouldn’t mind if I incorporated it into my kit instead. Luckily for us, he graciously accepted.

Which brings us to.. 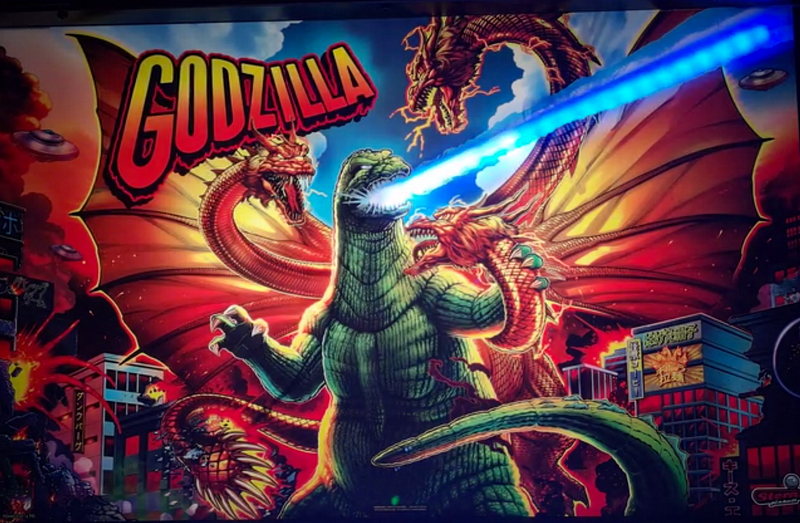 The LED strip for the above effect is mounted in a 30cm aluminium channel, and held in place with a custom transparent bracket, that can fit into one of 6 fixing points in the backbox. As luck would have it, these 6 points more or less run through a point on the Godzilla breath for all 3 versions of the backbox graphics, which means Pro, Prem and LE are all supported. 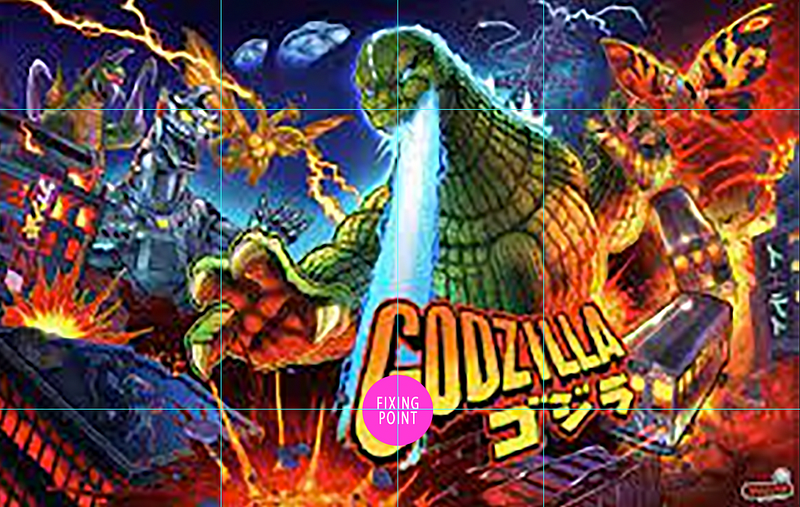 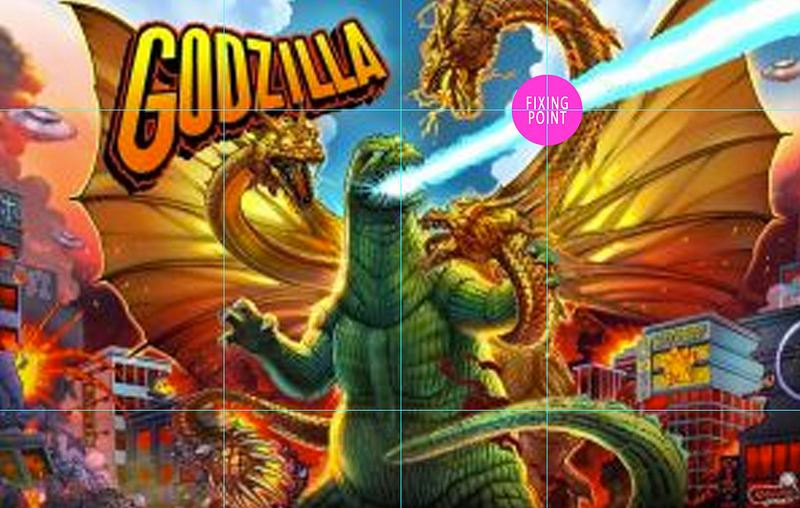 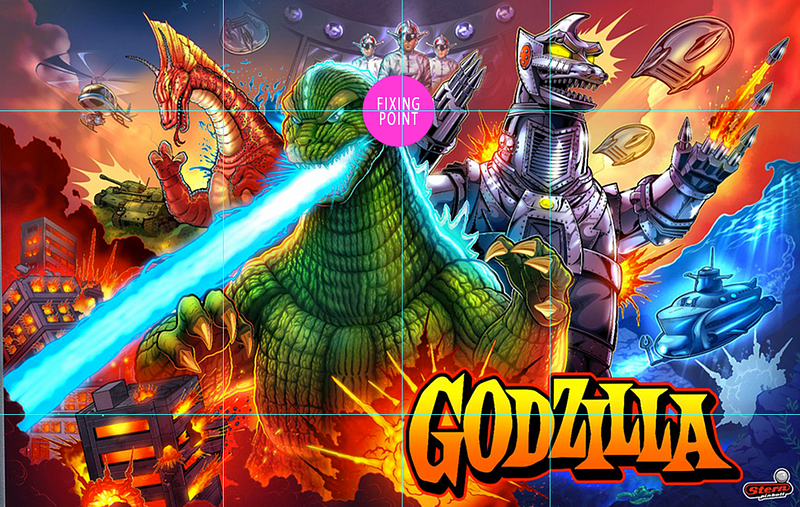 Example of the bracket in a Premium:

At the moment I have the effect tied to the newton ball in the bridge, however any switch can be used - some have suggested they would like to use the lockdown bar button instead (ie when triggering the heat ray), which is certainly possible, and I’ll make sure to include long enough extensions for those that want to do so.

Pictures are great but I need some footage!

You got it. Queue ultra profresh promo vid!

Those colours don’t match my drapes. Can I change them?

Of course! The kit is controlled using my Lollypops board, which as everyone knows is 100% controllable over WiFi (duh). This means all the patterns and colours can be changed easily from your phone, laptop, or Commodore 64. Firmware updates can now also be done directly on the board too, like how Stern does it. Fancy!

Impressive. Most Impressive! How much?

Cost of the kit is £199 (around 235 USD in today’s money) plus PP from the UK. This includes the Lollypops board, the hand painted resin UFO, the UFO LED ring, 2 x RGB post lights, 1 x backboard LED strip + channel and bracket, some sexy packaging, and all the wiring and incidentals. And probably a sticker too, let’s be honest.

When can I get it?

At the moment, I’m focused on getting the Tokyo Neon mods out, as there’s been slightly more orders than I was anticipating. I’m hoping to be all done with those in 2-3 months. Another consideration is that Paul has paint each UFO by hand, which takes a chunk of time, so we’re hoping to get an idea of the general interest so that he knows whether to cancel all his social engagements for the next 6 months. I did ask him for a contingency plan in case we get a crapload of orders and I think he slightly shat himself!

So at the moment, we’re aiming to start sending out in about 3 months.

Reply in the thread and we’ll stick you on the list. If I upvote your post, it means you’re on. I’ll post the full list as an edit to this thread when I can.

That's fine, just make sure you mention that in your reply to the post. Backbox only kit is £129.

Actually, I want to be really difficult. I only want the UFO.

No problemo. Just contact Jazzbouche directly and he will sort you out.

That’s about it. Any questions, hit me up!